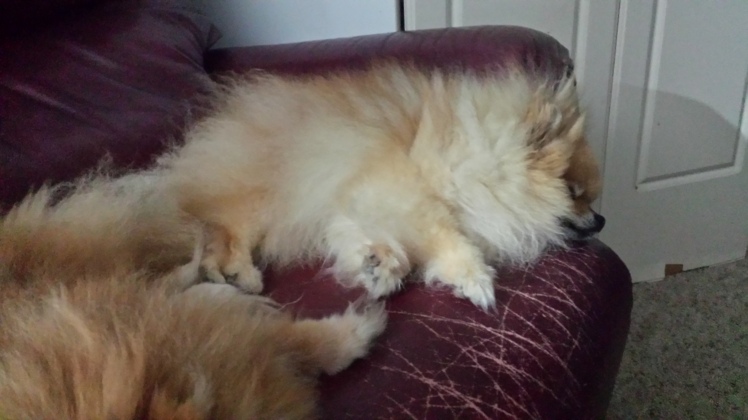 This is my Li Li.
Li Li is a very beautiful Pomaranian who was rescued by the breeder from a very bad kiwi owners home. She had been badly mistreated, several times pregnant to another of the owners dogs. When the breeder took her back her coat was falling out in clumps.
The vet took one look and said it would be kinder to put her down but the breeder refused. The vet desexed her which was hoped would cure the mange causing the bad hair loss.
Full marks to the breeder for persisting. The breeder had heard of Xiaoli and I and the fact that we already had 2 rescued Pomaranians. We agreed to take her on.
We collected Li Li from the breeder just north of Auckland for the 4.5 hour drive home. The poor girl was chronically sick very early on. We were unsure what to do as it was a long trip so in the end she sat wrapped in a towel on my lap as I drove.
I am not sure how long we have had Li Li now but it must be about 3 years. At night she sleeps on the bed beside my shoulder. She will turn from one side to another but never leaves my shoulder. At the most if its cold she may duck under the blankets.
In the morning she will not get up until I do. If Xiaoli gets near to put her out to the toilet you hear the little growl start. She says until dad gets up I dont move.
In the car she insists on just going to sleep on my lap. Never gets car sick now. Her tail wags. She goes almost everywhere I do. I move then she moves.
We are told Pomeranians can be vicious. All 4 of ours are so friendly its not funny. They have been taught that our customers must be treated right. They all love kids yet none of them when we got them was very sure about kids.
Li Li has a very special place in our house because of her early up bringing. She chose me, I did not choose her but we have bonded.
I had never had small dogs until Xiaoli came into my life. Never wanted a small one but I would not trade Li Li or the other 3 for a big dog anytime. They are just gorgeous people dogs
Isnt she gorgeous?
http://www.peterandxiaoli.com