Te Anau to Dunedin – A lot of sheep!

Yes, we saw a heck of a lot of sheep in paddocks on the way from Te Anau to Dunedin.

The day started with me having to change the mornings plans. Major flooding in Roxburgh had the road closed for an indefinite period so it meant rearrange the mornings plans. No more going via Central Otago to Dunedin but re-routing through the faster but less scenic route across to Gore then up the number 1 highway to Dunedin. No stone fruit country for my group. A disappointment but one cannot argue with the weather.

The drive was uneventful and we did drive through some pristine rolling country side with many sheep to be seen. The cameras were still to be heard behind me so I guess the group were still happy and over the earlier disappointment of me telling them about the route change. Breakfast television helped as the floods featured heavily so they understood the issues I had.

I was born in Dunedin. Lived there to I was 14 and the parents for work reasons headed north to Auckland. That was obviously a few years ago but other than changed roading, some one way streets, there never seems to be many changes. I am sure there are but just not obvious the route we travel.

The house I was raised in still looks similar. Some aluminium joinery but other than that it still looks the same. Memories!

Once in Dunedin we headed down the Otago Peninsula to the Albatross Breeding area. I am not a great one for studying seabirds but the tour was interesting. To see the Albatross stretch their wings was interesting and the highlight not caught on camera was when one came in close to our viewing area gliding past. It certainly illustrated the sheer size of these birds.

We need areas like these that protect birds like the Albatross in their breeding areas. These very large seabirds spend most of their life out in the ocean navigating the world yet come back to the Otago Peninsula to breed once a year once they have reached 5 years old.

From the Albatross we headed up the hill to join a tour to see seals in their breeding area plus the Yellow Eye and Little Blue Penguins.

Seals are nothing new for me but it was good to see the babies less than 24 hours old in their natural habitat. Unfortunately only about 25% of those born will reach adult hood with the predators waiting out there in the ocean to feed on them. Sad, but that is the environmental chain at work unfortunately.

One of the males tried to bale us up as he sought to protect his harem. Again nature at work. Fortunately we were well protected.

Before we departed Dunedin we stopped for photography at their famous railway station.

Dunedin is not a regular stop on my agendas but this summer I have 4 tours that spend a night there. Its all dictated by how long people have in the country as to whether Dunedin features. All my tours so far booked this summer start at a minimum of 18 days, so plenty of time to see Dunedin. 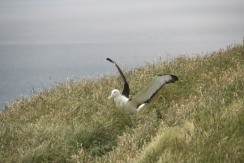 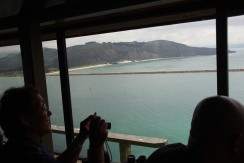 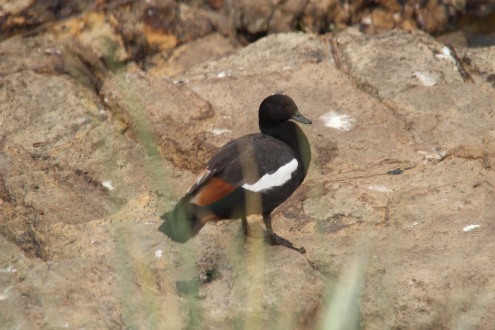 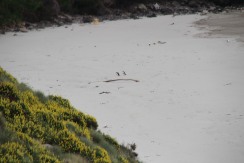 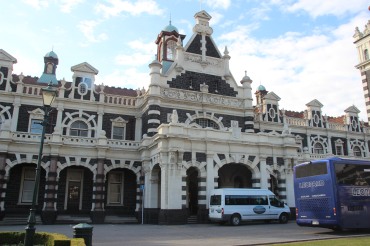