Today in theory a short morning drive to a close by beach. A walk. Then a rest day afternoon. Somehow with my tour groups it never works out like that and all seem very happy I extend their time out.

A 9am departure for Cathedral Cove on the Coromandel Peninsular. I had warned them the walk was not an easy one. Actually emphasised that yesterday and again this morning and offered to take any that opted out of the walk to nearby Hahei Beach. But all said they would do it.

My first tour this tour season this walk taxed me and I swore under my breath I would not do it again. But there was bus parking in the car park so on with the back pack with jacket, camera etc and off I go leading the way. Once I neared where the steeper decline and steps started I waited to make sure all were still with me. And suddenly I realised my fitness levels had greatly increased since the season started just 3 months ago.

2 in particular I was worried about as I had noted yesterday their difficulties. They as I thought would be the case, were last to catch up. So I accompanied them on the most difficult part of the walk.

Cathedral Cove was as always spectacularly beautiful. Some of the group took a dip while others just rested. I talked to one of the group who I thought through a previous conversation know a little first aid to have her follow as tail end Charlie on the return walk. All made it back. A number obviously out of condition and my concerns over 2 were with good reason. But they 2 made it but obviously it did take a beating on them.

Following that walk I now know how to recommend who does which walks in the next 16 days.

They all dug for hot mineral water on Hot Water Beach while I sat back in the bus due to difficulty with parking. All loved it although commented some of the water was scalding, but they had been warned.

A 3pm return to the hotel. 3 hours later than on their schedules but all very happy. Tonight a group dinner with most again. Tomorrow Hobbiton then Rotorua 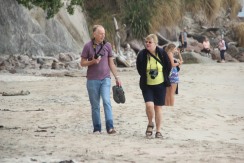 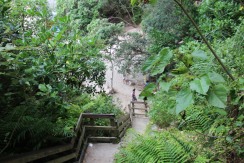